How Child Support is Calculated

About the assessment calculator / estimator

The child support calculator estimates how much child support you pay or receive if you are an Australian separated parent. It applies the basic formula, as defined by the Department of Social Services (DSS) – see How It Works.

The calculator offers a reliable estimate of child support for the vast majority of parents, with the caveats above, and noting:

For anyone entering into an arrangement involving a government assessment, Services Australia will ultimately determine the exact amounts payable or receivable. Assessments are based on the information supplied by parents and any other relevant information available.

What's wrong with our system?

The Child Support Scheme was designed to ensure that both parents contribute to the cost of their children, according to their capacity. There are approximately 1.3 million parents and 1.1 million children involved in the Scheme, and more than 40 per cent of Australian families who receive Family Tax Benefit include a child support parent.

The Child Support Program was introduced in Australia in 1988 to strike a fairer balance between public and private forms of support for children [and] to alleviate the poverty of sole parent families. The Program has undergone a range of changes since its original introduction in the late 1980s, including the substantial changes on 1 July 2008 to the child support formula and the introduction of the Costs of the Children Table.

Separated parents will be registered with the CSA if either parent makes an application to the CSA for a child support assessment. Parents can choose whether to have child support paid via private arrangement between parents ("private collect agreement"), or have it collected from the non-resident parent by the CSA and paid to the resident parent ("CSA collect agreement"). According to the CSA's administrative data, [47%] of child support cases registered with the CSA were CSA collect cases; the remaining [53%] were private collect.

Here is an income and care scenario which highlights issues with the child support formula. For more examples, see the examples page. 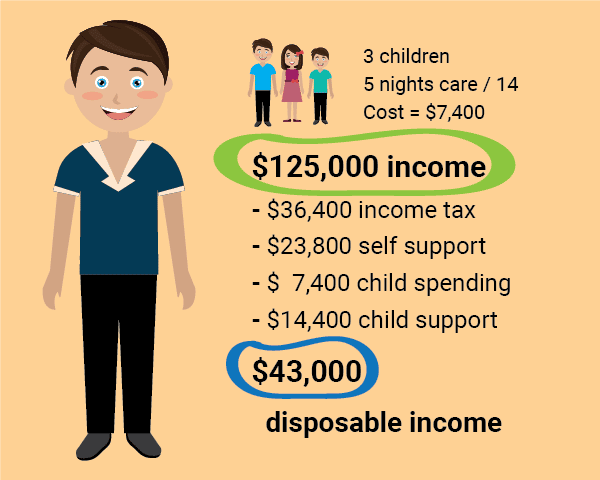 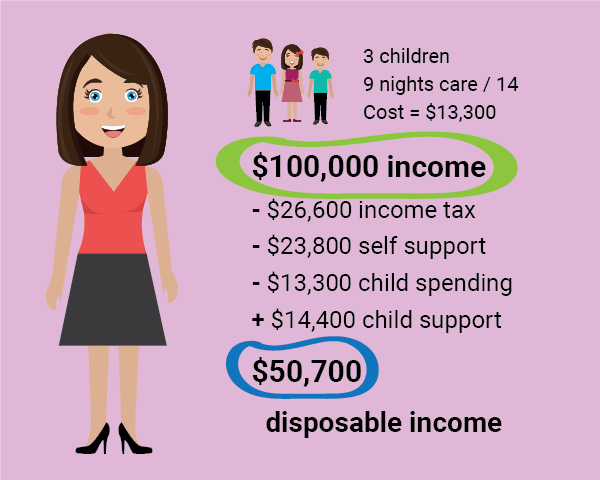 Child support was estimated using the calculator on this page (2016 version). The calculator was also used to estimate child-raising costs - as the Costs of the Children for parents with a combined taxable income of 5/3 x annualised MTAWE (and cost % = care %). Taxes were estimated using personal income tax tables and the Medicare Levy.